Background to the SCP

In 2002, a succulent project was initiated at the National Botanic Garden of Namibia under the auspices of the National Botanical Research Institute with financial support from the Southern African Botanical Gardens Network's (SABONET) Threatened Plants Programme, as a response to the rapidly increasing interest in Hoodia, especially Hoodia gordonii, but also to a much lesser extent H. currorii and H. officinalis ssp. officinalis, to meet the growing international demand for plant material. The aim of this project was to conduct a trial into the propagation and growing requirements of Hoodia to ascertain its appropriateness as a potential non-traditional crop species. This approach is very much in line with Namibia's sustainable utilisation philosophy and was seen as a potential measure to relieve pressure on the wild populations while enabling farmers (both commercial and communal) to benefit from the opportunity by diversifying their on-farm activities. After the successful completion of the propagation trials and with support from the Ministry of Agriculture, Water and Forestry's (MAWF) Namibian Agricultural Support Services Programme (NASSP), the SCP was formulated as a project in late 2003, with the mandate to promote and facilitate the production of Hoodia (and other succulent species) country-wide, with particular emphasis on conservancies and community groups, as a way of potentially contributing to the Government's Vision 2030 poverty alleviation targets.

The purpose of the SCP is/was to contribute to the successful expansion of cultivation of Hoodia and other succulent species, to realise their commercial value and as a long-term conservation measure.

Collaborators with the SCP

All the conservancies (registered or emerging) in southern Namibia were approached to participate in the Project. Meetings were held with the conservancy management committees and traditional authorities to disseminate information, to clarify the purpose and potential of the Project, to explain what is required and to elicit support for and participation in the Project. The conservancies included !Khob !Naub, Berseba (still an emerging conservancy), !Gamaseb, Oskop, !Navachab in southern Namibia. Oskop and Berseba demonstrated a lack of interest and/or organisational capacity at an early stage and minimal progress was made with them, while !Navachab was a late candidate for the Project, with progress restricted to limited discussions due to the ending of the funding period of the SCP.

!Khob !Naub and !Gamaseb Conservancies showed sufficient interest and only !Khob !Naub proved to have the organisational and leadership capacity to make progress with the Project. In the northwest, the Ozondundu Conservancy was identified as a candidate for the Project and for a while some progress was made there, with logistical support from the IRDNC.

Two community organisations were also identified and received support from the SCP. These were the Karasburg Community Centre (a self-help HIV organisation) and the Omaheke San Trust. Despite initial progress, both these initiatives struggled to progress due to weak leadership and commitment to the growing and maintaining of the plants, as well as the ending of the SCP funding and technical support. By the end of the September 2006, despite significant strides by the national industry, especially some commercial farmers, only !Knob !Naub Conservancy was in a position to take advantage of the emerging industry as a significant producer of seedlings.

Due to a lack of continuity in funding the SCP ceased operating in September 2006, although the "co-ordinator" continued to provide inputs into the !Khob !Naub Conservancy. Regrettably, due to staffing problems the Conservancy neglected to maintain or expand its cultivation activities through the main growing period of 2006/2007 and missed an opportunity to sell a large number of seedlings in the local market at a time when demand was high and supply was short. Ozondundu Conservancy also failed to meet propagation targets or to expand its seedling numbers or to maintain mature live plants rescued from road works and donated to it, resulting in the missing of an opportunity to sell the plants to a lodge in the northwest for a not insignificant price. Nor did the conservancy successfully expand into other succulent species, through the rooting of cuttings, as was its plan.

Notwithstanding the limited progress with cultivation in the conservancies and rural communal areas, a number of positive impacts have been made:

With the ending of the NASSP funding, the SCP's activities have to a large extent ceased. Further funding for the !Khob !Naub Conservancy until the end of 2008 is being provided by the Integrated Community-based Ecosystem Management (ICEMA) Programme's FFEM component, with technical inputs and support from the NBRI's PPD (now Economic Botany) incumbent. This has allowed the conservancy to continue with its cultivation of Hoodia activities and to expand the number of satellite nurseries within the conservancy. Currently the conservancy is facing two constraints that will need to be overcome if it is to successfully continue with Hoodia. These are the need for significantly more seeds than can be collected from the in situ populations within the conservancy and the accessing of funds to develop the infrastructure needed to step up the volumes of plants under cultivation for eventual harvesting.

The Ozondundu Conservancy nursery has been relocated to a site near Sesfontein in the Kunene Region, where different nursery staff will be appointed to continue with and expand the operation. The potential in this region to diversify succulent production into a number of species and to focus on cuttings to produce large specimens in a shorter time period presents the conservancy with the option of being able to sell successfully rooted plants into an already existing regional and international market in a few years from now.

The SABONET's Threatened Plants Programme propagation trial and the SCP have demonstrated that the sustainable utilisation of selected succulents through cultivation and resource management is possible in much of Namibia's more arid and marginal farming areas, with the potential to realise income from the resource. The growing awareness of the resource in conservancies means that there is an opportunity to expand this initiative and to incorporate a larger number of growers within the conservancy network, thereby contributing to the in situ conservation of succulents in a large area of the country. A major challenge facing any project promoting the cultivation of succulents is the time period during cultivation before any financial returns are accrued. Usually this can be for at least 3 - 4 years and even longer, as many plants attract an increasing monetary value with size and age. The use of cuttings as cultivation material can speed this process, but the long period without any income does create a challenge in terms of the continuity of staffing and plant (seedling) maintenance.

At this stage the PPD section of the NBRI, as part of its function, is continuing to support the development of the opportunity around succulents through direct involvement with the conservancies, participation in the HWG and the HOGRAN. Although these activities dovetail comfortably with the PPD, it is envisaged that with external funding, the SCP could continue as a self-standing project, in a modified format. 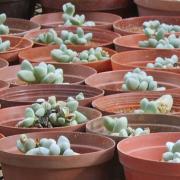