» Read more about our core functions.

Namibia is a Contracting Party to the International Treaty on Plant Genetic Resources for Food and Agriculture (ITPGRFA). The collections of plant genetic resources listed in Annex I and maintained at the NPGRC have been included in the Multilateral System. These will be made available to users under the conditions of the Standard Material Transfer Agreement of the ITPGRFA.

For its ex situ collection, the NPGRC collects seed of both wild and cultivated indigenous plants. These seeds are cleaned, dried, sealed in air-tight foil packets and stored in deep freezers at -20°C. Further activities of the NPGRC include seed multiplication, description of plant traits of each seed sample, periodic germination tests, documentation of all information from collection to storage and distribution of seed to bona fide requesters.

In order to request samples of Namibian plant genetic resources, the following procedure should be adhered to:

This project has two components:

In situ conservation of wild plant genetic resources looks at the conservation of plant resources at their site of occurrence. To date the project has concentrated on the identification of Namibia's most threatened plant species by compiling a Red Data List using the IUCN categories for assessment. A Red Data book for plants was published which aims to increase awareness among Namibians of the rare and threatened plants and includes descriptions, maps and pictures. Further steps planned by the project are the identification of areas with high concentrations of rare and threatened plants worthy of conservation (in collaboration with the Ministry of Environment and Tourism). 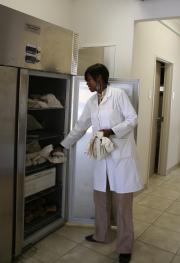